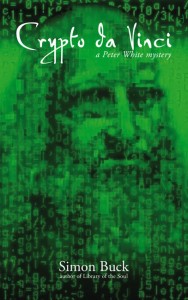 One Queen, two Kings, a Cardinal, a genius and a misnamed Righteous Elector. Just another day in the life of Peter White!

Three people, from different times, with different motivation, but in a similar dilemma, united by a secret code.

Passion: Queen Anne, married after a fairytale romance, caught between a loveless marriage to her husband King James and the guilty secret of her brief affair with handsome seducer, Frederick the Righteous – unknowingly the father of her daughter Elizabeth. Years of repression come to a puissant climax when James announces his intention to marry Elizabeth to Frederick’s son. Aghast, Anne has nowhere to turn but the religious leaders she was brought up to despise and who are hated by the rest of the English court.

Obsession: Leonardo is also caught between Church and State. The Cardinal of Aragon persuades the world-renowned genius to apply his talents in the ‘service of God’ to fulfil a dream of freeing the populace to spend their time in divine worship. The King of France, in awe of Leonardo’s brilliance, but no intellectual lightweight himself, is dubious of the Cardinal’s motivation and cautions Leonardo. Leonardo may have nowhere to turn but away from the religion with which he has only recently been reconciled.

Truth: Peter White’s life suddenly becomes complicated when he discovers the key to a cipher system, invented by Leonardo, hidden in the illustrations of a 17th century book. Soon Peter and his closest friend Al discover that this cipher has been used to hide both Anne’s confession and the journal of Leonardo’s anguished journey through the Cardinal’s project. But uncovering truth can be very dangerous, especially when it threatens the very legitimacy of the British monarchy.

For background information about the book, the characters and the historical events that inspired this story, visit the Crypto da Vinci website.