Library of the Soul 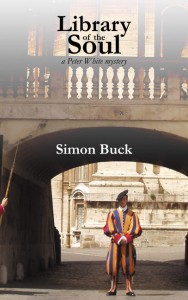 Library of the Soul, a Peter White mystery by Simon Buck, from Alnpete Press

For years the CIA have been using a poison designed to cause a heart attack and then disperse without a trace. Now a batch has gone missing.

On a visit to Rome, Peter White is recruited by his old friend Costanza into the oldest secret society in the world, in order to help her solve an urgent problem. Cardinals and other clerics around the world are dying of unexpected heart attacks. Police authorities are not interested as there is no evidence of foul play. But Costanza believes someone is using electronic cash and a betting website to fund and coordinate a campaign of murders that will ultimately lead to the assassination of the Pope. She and Peter must track down the killer before any more people die. Using the world’s largest supercomputer, deep in the Secret Archives beneath the Vatican Library, they lay an electronic trap and wait. But when the Library itself becomes the target of an audacious plot to steal a 2000 year old manuscript, the problem suddenly becomes much more personal.